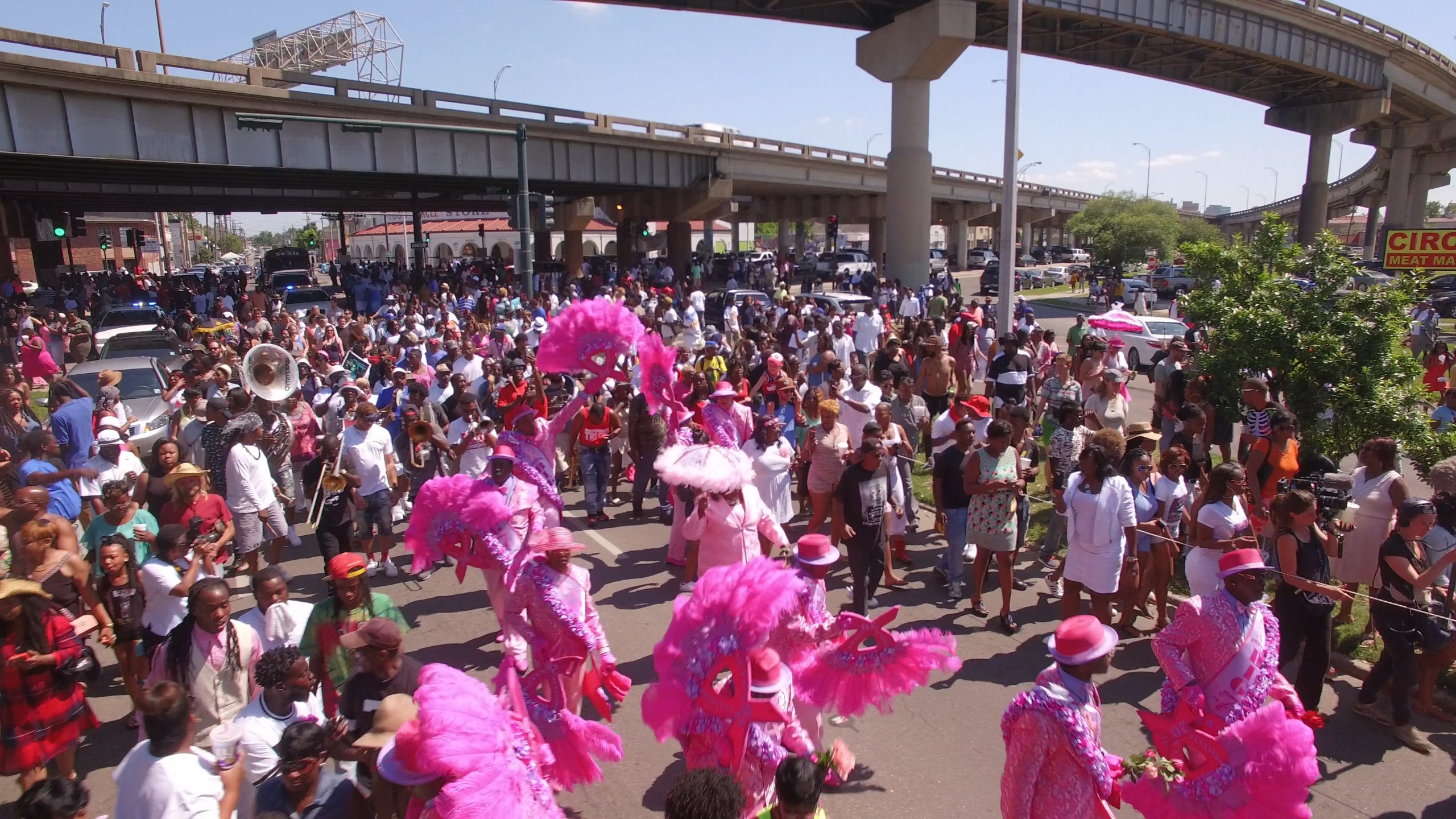 Gambit Weekly
By Will Coviello

Second lines are a calling card for New Orleans, whether they’re experienced as the parades put on most Sundays throughout the year by social aid and pleasure clubs, the versions that have become parts of weddings and events, or the knockoffs arranged for tourism and convention groups who fall in behind a brass band and walk.

New Orleanians know the relation of the parades to jazz funerals. There’s hardly a documentary about New Orleans music and culture that doesn’t include images of second lines, but few films dig into their history and meaning like Jason Berry’s “City of a Million Dreams.” With its onscreen narrators, clarinetist Dr. Michael White and the late Deb “Big Red” Cotton, even fewer are as well positioned to discuss the relationship of loss, relief and joy.

Berry, who has written extensively about the city’s music and history, released the book “City of a Million Dreams” to coincide with New Orleans’ tricentennial. It used the jazz funeral for Allen Toussaint as a jumping off point for an expansive look at the city’s history and ongoing challenges, which include the removal of monuments to the Confederacy and white supremacy. The film is a companion piece that focuses primarily on jazz funerals and second line traditions.

Much of the documentary is seen through the eyes of White and other musicians, including trumpeter Gregg Stafford. White talks about being invited as a young man by Doc Paulin to play his clarinet in a jazz funeral procession. White estimates that he’s played in more than 200 jazz funerals. Stafford recounts joining Danny Barker’s Fairview Baptist Church Band, which trained a generation of young musicians who would become leaders in the city’s jazz bands and reinvigorated brass band traditions.

The film explains the transition from the once prevalent benevolent societies to Social Aid and Pleasure Clubs. Because of systemic racism, insurance companies used to not write policies for Black people, and the societies organized to pay for doctor visits and also burial in a society tomb. They also provided the band for the funeral procession, when the bands went from playing mourning dirges to more ecstatic music following the burial. Second line parades now are primarily celebratory, though they reflect more than that. Fred Johnson discusses the importance of the formation of the Black Men of Labor group, and there’s great footage of its first parade.

But one of the film’s most notable strengths is the abundance of footage from funerals and funeral parades, especially for culture bearers. That includes the ceremonies for Big Chief Donald Harrison Sr., Linda Lacen, the wife of sousaphonist Anthony “Tuba Fats” Lacen, the legendary Paul Barbarin’s funeral in 1969 and more. There’s also interview footage with Harold “Duke” Dejan, leader of the Olympia Brass Band.

As a musician and historian, White has great insight into all of this. His house was flooded during Hurricane Katrina, and his tour of the wreckage echoes the film’s sense of tragedy and loss.

Deb Cotton’s story also is poignant. She moved to the city and fell in love with its culture. She covered second lines for Gambit and wrote about the city’s culture in her own book and online. She was one of 19 people shot during a second line on Mother’s Day in 2013. She appears on film, both documenting parades before the shooting and afterward. She publicly forgave the man who shot her and visited him in prison. In the years following the shooting, she had 36 surgeries and died in 2017.

It’s a harsh reminder that the parade tradition was intricately tied to grief. It’s also part of understanding the impetus that drives the parades’ celebration of life. Berry’s documentary is one of the few that captures the whole picture.

“City of a Million Dreams” opens at The Broad Theater on June 17.