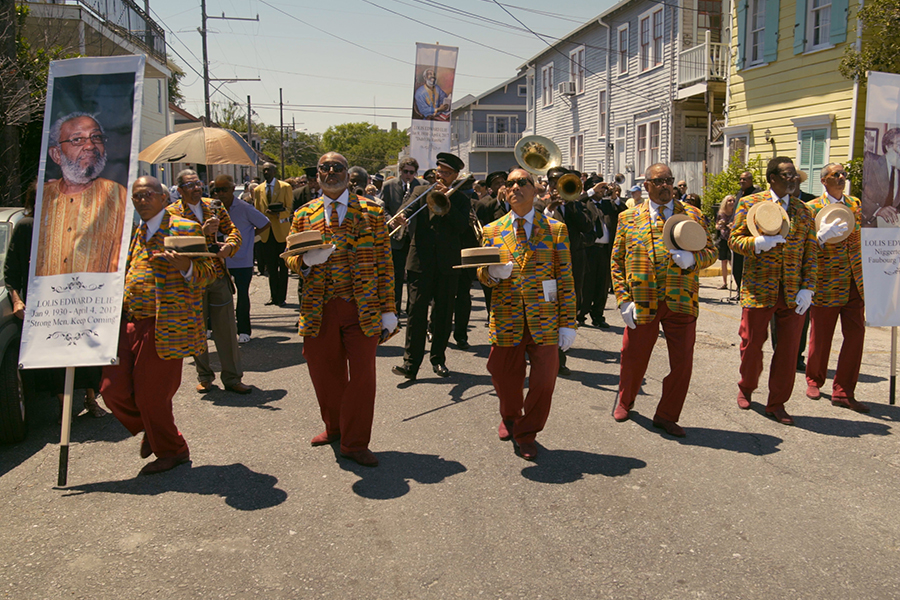 (RNS) — Three decades ago, Jason Berry earned his place in journalism
history by breaking the story of the sexual abuse and coverup scandal in the
Catholic church. But as much as the longtime New Orleans freelancer has
written about the scandal over the years, his passion has been for his native
city and its music.
Three years ago Berry published “City of a Million Dreams,” a 300-year
soup-to-nuts history of The Big Easy, and this fall he’s produced a film of
the same name, subtitled “Parading for the Dead in New Orleans,” a
portrait of the city as seen through its unique jazz funeral parades.

Just as Black musicians created jazz by combining European and African
instruments and musical forms, so Black residents of New Orleans seized
on European-style funeral processions and made them their own.
Traditionally, the funeral cortege would march to a cemetery with a brass
band playing slow dirges. After interment, the music would turn up the
tempo to celebrate the soul’s release from its earthly trammels.
The band would then lead a “cutting loose” parade that featured “second
liners” dancing their way back to town in celebration of the life of the
deceased. The second line has its roots in the African dancing that took
place in the city’s fabled Congo Square, where enslaved people were allowed
to gather on Sundays.

These days, with the growth of the city sometimes creating long distances
from church or mortuary to cemetery, the shift from slow to fast music
takes place without interment. The music itself marks the release.
Catholic, Baptist, whatever, these jazz funerals know no sectarian
boundaries. You might call them the civil religion of New Orleans’ souls.
While “City of a Million Dreams” documents an institution and its history,
it focuses on the personal stories of musicologist and outstanding local
clarinetist Dr. Michael White and Deborah Cotton, a Jewish person of color
from San Francisco who fell in love with the city and became the parades’
foremost videographer. Their stories are inspiring and, in different ways,
heartbreaking.

At a moment in American society when cultural appropriation can be
considered a capital offense, the film pushes in the opposite direction.
“New Orleans is, you know, this space where so much mixing happens and
it’s a gumbo,” said Black choreographer Monique Moss, who recreated
Congo Square dance sequences for the film, after a recent screening.
“If there were to be any pushback against Jason being a European male
approaching a subject that appears to be African based, if you watch the
film three times in three days like I did, then you get a much clearer
understanding that he has just as much of a right to speak on this culture as
anyone,” she continued.

“There are people from various cultures, who have contributed to New
Orleans culture, and so this is one of the reasons why I felt completely okay
with joining him in this incredible venture,” she said.
“City of a Million Dreams” is currently being shown at the New Orleans
Film Festival, which is streaming it for $10 through Nov. 22. Check it out.

Read the full piece here in the Washington Post.