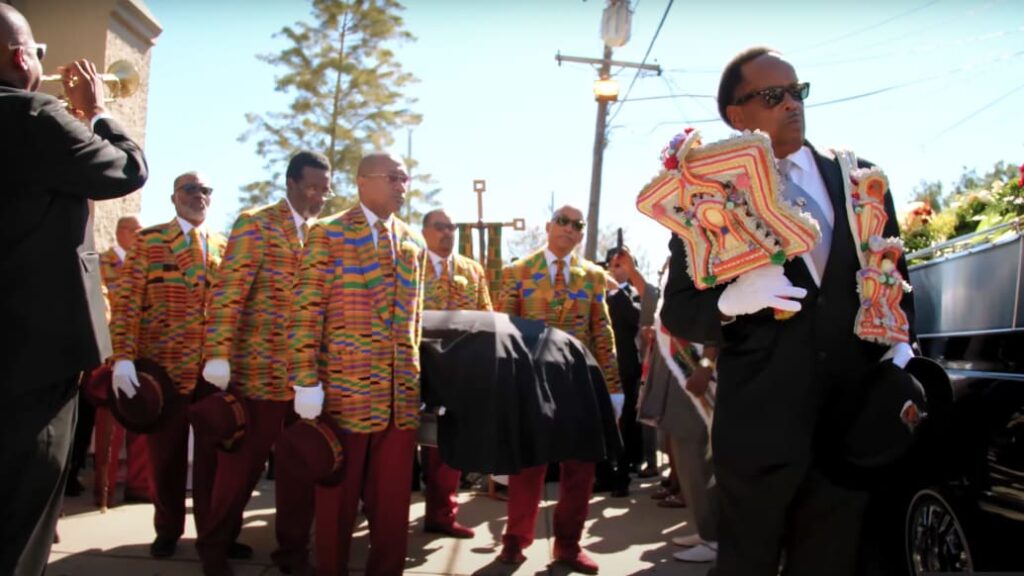 “The other moment that stood out to me from the screening two years ago occurred a few minutes after the movie ended. A well-dressed, elderly Creole man stood up and began sharing the reasons he was so profoundly grateful for the film, and as he spoke, his eyes welled up with tears and his voice began to tremble. I confess that I had no idea who this man was, but a friend sitting next to me whispered the man’s name to me. “That’s Deacon John,” he told me, a name I recognized of course.
But that’s almost beside the point because he was expressing the same sentiments and emotions that an entire generation of New Orleans musicians would have after seeing City of a Million Dreams. The film was a “masterpiece,” Deacon John declared. Rewatching the funerals for so many of his contemporaries and friends obviously reminded him of the tragedies of so many incredibly talented people. But once he had exhausted his sadness, he began explaining and reminiscing about the music, and in almost an instant, his mood lifted back up.
There weren’t any second lines for Princess Leia or memorial parades for the “no-call” that prevented the New Orleans Saints from advancing to Super Bowl LIII in Berry’s film. These were the funerals for real human beings, people whose connections to the community were deep and profound and who too often were taken senselessly and far too young. When you try to inventory the scale of suffering, it can be overwhelming.
These peculiar traditions are not meant to trivialize death, nor are they intended to paper over grief. Their magic isn’t derived from the mere performance of spectacle but instead comes from our collective ability to conjure up joy and hope from the depths of despair. If there is one overarching lesson to be learned from City of a Million Dreams, it is that for joy and hope to be authentic and meaningful, then grief and despair must be as well.”
Wow!! Click below to read the rest of the piece in the Bayou Brief. Thank you to Lamar White Jr. for your thorough, heartfelt, and beautifully written piece on the film and filmmaker!
https://www.bayoubrief.com/…/city-of-a-million-dreams…/
By jennyl|2022-04-22T17:28:48+00:00October 22, 2021|Uncategorized|Comments Off on ‘City of a Million Dreams’ Chronicles the Dangers and Mystic Pleasures of Living on the Threshold